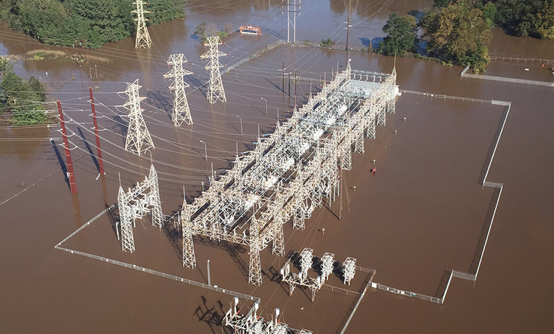 The North Carolina General Assembly’s Senate Select Committee on Storm Related River Debris and Damage in NC met in April and heard from a host of entities from academic, government and non-profit organizations working on flood resilience in the state. UNC Institute for the Environment Director Mike Piehler spoke on behalf of an interdisciplinary, inter-institutional team from UNC-Chapel Hill and NC State University on a collaborative research project that investigates flood resilience from a wholistic perspective.

“This testimony was a product of our involvement in the NC Policy Collaboratory-funded flood resilience project,” says Piehler. “Several years back, after a barrage of hurricanes, there was a concerted bipartisan effort in the General Assembly to think more about flood resilience.”

In 2019 the Collaboratory received $2 million in funding from the General Assembly as part of a Hurricane Florence disaster recovery package approved by the legislature. The Collaboratory was charged with studying flood and resiliency against future storms in eastern North Carolina and developing an implementation plan with recommendations.

“The Flood Resiliency Study is an important example of bringing a team of university researchers together and utilizing their expertise to help develop solutions to flooding in eastern North Carolina. The study brings real value to the citizens of North Carolina,” Warren says.

Piehler, who served as the faculty lead for the study, and the research team were given a short deadline to generate new research around flood resilience that would lead to recommendations for ways that the state can be proactive in supporting resilience after catastrophic storms and flooding.

“The series of hurricanes starting with Florence in 2018 brought really profound and different flooding challenges to different parts of the state,” Piehler says. “Our work is significant because as we’ve known for many years that because of the thousands of miles of interior coastline and hundreds of miles of ocean coastline it is at risk for rising water levels whether on a long-term scale or during a storm. So understanding the degree to which that risk is distributed with individual people and with communities across natural systems and across built systems is critical.”

The report offers recommendations on financial risk in environmental systems and financing resilience efforts, how to conduct floodplain buyouts effectively and efficiently from start to finish, understanding how natural systems interact with the built environment, including strategies such as landscape to hold flood waters and understanding how best to encourage residents in flood-prone areas to manage that risk.

“Providing communities with more advanced resilience strategies, through both pre- and post-flood activities, requires both new data and novel analytical techniques,” says Greg Characklis, W.R. Kenan Jr. Distinguished Professor in the Gillings School of Global Public Health’s Department of Environmental Sciences and Engineering. “The resources provided by the state, via the Collaboratory, allowed us the ability to develop both and thereby identify the communities most at risk, as well as the best steps the state can take to help them bounce back in the wake of a flood.”

Regardless of whether the recommendations are included in legislation, the research team is confident that the information they are reporting can help scores of North Carolinians make better decisions about the natural and human systems of the coast. The information can be shared out with other academic, nonprofit and government agencies and used to organize and coordinate efforts to intervene and positively impact residents in the state.

“My hope is that the recommendations will be useful in starting with legislation to advance flood resilience at the state level, providing ideas around constructive things the state can invest in to meet these challenges,” Piehler says. “This meeting of the Senate Select Committee is reflective of the degree to which all of the state is concerned about the issue of flood resilience and this was a really neat opportunity to hear a lot of discussing the same issue. I think that was a clear representation of how important it is.”

The final study report was submitted on June 1, 2021 with a list of recommendations.  All of the technical project reports supporting the study can be found at:  https://collaboratory.unc.edu/current-projects/flood-resilience/