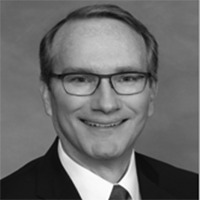 Senator Newton was born in Smithfield, North Carolina, and grew up in Eden, North Carolina. He earned his Bachelor of Science in Business Administration and his law degree at the University of North Carolina at Chapel Hill in ’82 and ‘85. He graduated from Harvard Advanced Management program in 2008.

Following law school, Paul joined the Hinkle Law Firm in New Mexico for five years, and returned to North Carolina to serve as a lawyer for Duke Power Company, becoming General Counsel of Duke’s national utility operations.  He then moved into the business realm to serve as Senior Vice-President of Strategy, Rates, Wholesale Customers, Commodities and Analytics, and finally served as Duke Energy’s North Carolina State President, before retiring in September of 2015, after 25 years with the company.

Paul currently serves as the State Senator for District 36, which is defined by Cabarrus and portions of Union Counties. This is Paul’s first term in office.

Senator Newton is a member of 7 standing committees: the Senate Healthcare, Commerce and Insurance, Judiciary, Pensions and Retirement and Aging, Agriculture/Environment/Natural Resources, Appropriations on Agriculture, Natural and Economic Resources and Redistricting committees.

This interim, Paul was selected to serve as a co-chair for the Joint Legislative Commission on Energy Policy and the Committee to Study Rates and Transfers/Public Enterprises (LRC). He was also appointed to be a member of 5 non-standing committees: the Joint Legislative Program Evaluation Oversight Committee, Study Commission on Efficiency and Cost-Savings in State Government, Elections Oversight Committee, Judicial Reform and Redistricting Committee and Oversight Committee on Unemployment Insurance. Additionally, Paul is a member of 2 Senate select committees: North Carolina River Water Quality and Judicial Reform & Redistricting.

Paul has been married 31 years and has four children and three grandchildren.