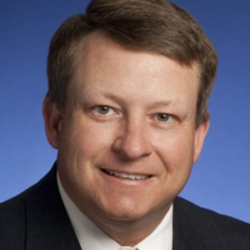 Jai Templeton is a 6th generation grain, cotton, timber and beef cattle producer from McNairy and Hardin Counties located in southwestern Tennessee.  Templeton recently completed his service as the 37th Commissioner of the TN Department of Agriculture from May 2016 to January 2019.  His focus as Commissioner was rural economic development and building TN’s ag tech infrastructure.  He joined the department as Deputy Commissioner in June 2011.  Prior to that he was County Mayor of McNairy County, Tn serving from September 2006 to May 2011. He had also served as county commissioner for two terms.  Templeton previously served as District Field Representative for U.S. Representative Ed Bryant in TN’s 7th Congressional District.  He has prior service with the University of TN Board of Trustees, TN Board of Regents and the TN Cattleman’s Association Board of Directors.

He holds a B.S.B.A. From Union University and is a graduate of the Nashville Auction School.  He has participated in many professional leadership development programs.  He currently serves on the Agricenter International Board of Directors and the EPA’s Local Government Advisory Committee.