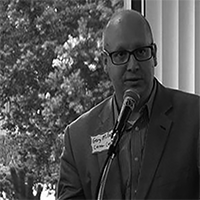 Gary Alan Miller serves as the Director of University Career Services. He previously worked at Carolina from 1994-1999 and 2008-2014 before returning to UCS in 2017 – he can’t stay away!  Gary was born in Tennessee, but has also called Atlanta, Seattle, and New York home over the past 25 years.  He holds degrees from Middle Tennessee State University and Georgia State University, and he is currently completing his dissertation for a doctoral degree from Hofstra University.  In his spare time, Gary writes music for television and film, and his songs have appeared in 50+ television shows, including The Voice, American Pickers, and Tiny House Nation.  He also enjoys exploring and traveling new areas with his son.  While he can’t be certain, he’s pretty sure his family cat is out to get him.