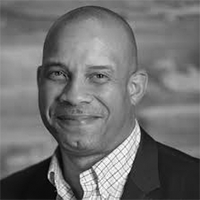 Doug Speight is Executive Director for American Underground, a campus for entrepreneurs in Durham, NC.  American Underground is home to 275 startups and a diverse startup scene dubbed “The Startup Hub of The South,” by CNBC.  Speight is formerly founder and CEO of Cathedral Leasing, a B2B equipment finance firm  and one of seven 2016 Entrepreneurs in Residence for Google and CODE2040.  Speight has served as co-founder and/or founder for four tech startups, in addition to leading technology transfer and commercialization divisions for NC A&T State University, NASA and the Department of Energy.  He has served as Entrepreneur-in-Residence for the GIGTANK venture accelerator, the nation’s first 3D printing venture accelerator and holds several patents for 3D printing technology.  Speight earned a bachelor’s degree in Industrial Technology from NC A&T State University and a MBA from Kenan-Flagler Business School at the University of North Carolina at Chapel Hill.