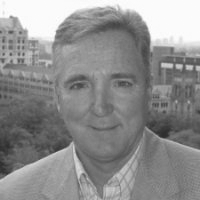 Since 2009, Denis Leclerc is President and CEO of Écotech Québec, representing the Québec cleantech cluster. He is also the Chairman of the International Cleantech Network, based in Copenhagen (Denmark).
During his 20 years in the natural resources sector, Mr. Leclerc held several senior management positions, namely Vice-President Sustainability and Environment for AbitibiBowater, a global forest products corporation.  Mr. Leclerc has been involved of many projects and strategic decisions for companies with operations in Canada, the United-States, Europe and Asia. He has proven experience in issue management, public affairs, sustainable development and in relation with investors, socio-economic players, governments and media. Highly involved in the community, Mr. Leclerc sits on the Board of Directors of Ecofuel, the Québec Cleantech Accelerator and of COOP Carbone; on the Executive Committee of SWITCH, the Alliance for a Green Economy; on the Community Advisory Board of Aéroports de Montréal, and on the Québec Advisory Committee of the Minister of Sustainable Development, Environment and the Fight against Climate Change. In addition to being a Chartered Director, Mr. Leclerc holds an MBA from the Université de Sherbrooke.