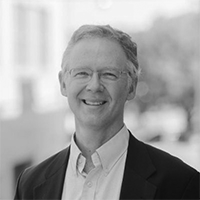 Prior to SJF, Dave founded and managed two other successful enterprises – KirkWorks, a cleantech investment research firm; and SunShares, a solar energy and recycling company. Dave was named the 2005 CDVC Practitioner of the Year by the Community Development Venture Capital Alliance and Recycler of the Year in 1996 by the National Recycling Coalition. Dave co-founded the SJF Institute in 2001, which merged with Investors’ Circle, a twenty-year-old impact investment angel network, in 2011.

Dave earned a BA in Physics and History from Duke University in 1982 and an MBA from UNC Kenan Flagler Business School (KFBS) in 1991. He was named KFBS Executive MBA Alumnus of the Year in 2010.  He enjoys gardening, kayaking and trying to learn Spanish.