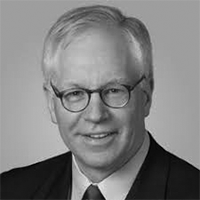 Carl J. Schramm is recognized internationally as a leading authority on entrepreneurship, innovation, and economic growth. Currently he is university professor at Syracuse University. For 10 years he served as president of the Kauffman Foundation, making it into the world’s premier organization dedicated to the development of high-growth firms and understanding the role they play in economic growth. He serves as a visiting scientist at MIT and as a fellow of the Bush Institute. He is a Batten Fellow at the University of Virginia’s Darden School of Business and is a member of the Council on Foreign Relations. Schramm’s most recent book, “Better Capitalism” (co-authored with Robert Litan) was published by the Yale University Press in September 2012. He has written several other books, including “Good Capitalism, Bad Capitalism” and “The Entrepreneurial Imperative.”

Carl J. Schramm holds a Ph.D. in economics from Wisconsin where he was a Ford Foundation Fellow and a New York State Regents Graduate Fellow, and earned his law degree at Georgetown.  He held two consecutive Career Scientist Awards from NIH, and was a Robert Wood Johnson Foundation Health Policy Fellow at the National Academy of Medicine.  He holds five honorary degrees and the University of Rochester’s George Eastman Medal.  He is a member of the Council on Foreign Relations and a Fellow of the Royal Society of Arts.