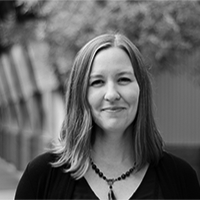 Ms. Bybee has worked in the solar industry since 2003. Her entrée was promoting renewable energy policy in Austin, TX while at Public Citizen, where she served as the coordinator of the Solar Austin Campaign. The campaign worked closely with the municipal utility, Austin Energy, to establish the first solar rebate program in Texas in 2004. Ms. Bybee then went on to work at Meridian Energy Systems, a solar EPC company.

Ms. Bybee joined Namasté Solar (also a solar EPC) in January 2006 as an early member of the team. She held numerous roles over her 11 years there, from technical sales & design to business development. While there, she worked to obtain a federal charter for a unique financial institution that funds clean energy products and services: Clean Energy Credit Union (www.cleanenergycu.org). This was only the 17th federal charter issued since 2010, and the first in the state of Colorado for over 30 years. She continues to serve as a volunteer on the Supervisory Committee of the credit union. Additionally, in 2016, she helped earn an award from the U.S. Department of Energy SunShot Initiative to found the Amicus O&M Cooperative (www.AmicusOM.com).

The O&M Cooperative brings together a network of providers across the country to provide coordinated services for geographically distributed portfolios. She now serves as its CEO, and is committed to the mission “to ensure that solar PV fulfills its promise as a responsible and reliable energy source, for generations to come.” She obtained a BA in English and French from the University of Texas at Austin, and through solar, has found her “inner engineer.”