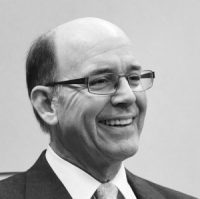 Chip has an eclectic group of clients encompassing a wide range of business endeavors, both well established and just starting out. Their one consistent note is their loyal and committed relationship with our firm. With each, Chip helps them reach their business goals by anticipating and effectively solving legal issues that inevitably occur in today’s complicated and ever-evolving business environment. His experience is invaluable in providing the best solution at the most opportune time. Chip’s father was an exceptional trial lawyer, and it was while Chip was in the Navy that he realized that he enjoyed being able to advise others on legal issues. After 4 years of serving his country, he attended Wake Forest Law School and there served as Editor in Chief of the Wake Forest Law Review. Upon graduation, he joined his father in the firm he had founded. After several years of assisting in litigation matters, he shifted his focus towards assisting businesses as they were formed and as they grew. This business focus led him to work with foreign companies seeking to do business in the United States. Chip also advises family businesses that are facing the challenges of succession planning.

Chip has been extremely active in organizations in his community, having served as Chairman of the Greensboro Chamber of Commerce and helping to found Leadership North Carolina, a statewide leadership development organization for which he served as Chairman for 5 years. For the last several years he has served as the Co-Chair of the Piedmont Angel Network, an organization that seeks to provide funding for early-stage entrepreneurs. Chip and his wife, former U.S. Senator Kay Hagan, have three grown children and a grandson. One daughter is a geologist, their son is in medical school, and their youngest daughter is a banker. Chip is an outdoorsman who enjoys hunting and fishing in his downtime.