More than 2.3 million people in North Carolina rely on groundwater from private wells as their primary source of drinking water. 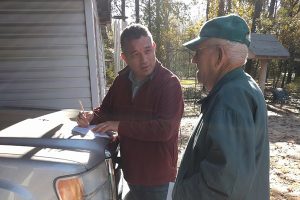 The Center for Public Engagement with Science is collaborating with the UNC Department of Environmental Sciences and Engineering (Dr. Rebecca Fry) and Virginia Tech Department of Civil and Environmental Engineering (Dr. Marc Edwards) to document and respond to private well contamination in environmental justice communities in North Carolina. Over four years, we have tested wells and reported findings to over 1,200 private well users in six communities across the state, including several environmental justice communities. By offering free well tests and, when contaminants are identified, filters, we have helped some of NC’s most vulnerable populations to understand and respond to well water contamination in their communities.

Well Empowered builds upon work done in partnership with the UNC Superfund Research Program, the NC Department of Health and Human Services and other state agencies to map the distribution of contaminants found in NC private drinking water wells and develop an online resource for North Carolina well owners. Most private well water comes from underground water supplies, called groundwater.  All water, even water from deep underground, can contain some impurities. Contaminants can enter groundwater through the erosion of natural mineral deposits, precipitation (rainfall or snowfall), and run-off, as well as some agricultural and industrial activities.

Since 2008 all newly constructed drinking water wells in North Carolina must be tested for bacterial and chemical contaminants within 30 days of the well construction being completed.  However, there are no other required tests for private wells in North Carolina. As a result, it is important for private well owners to perform regular well-testing and maintenance to identify contamination problems early.

Using private well test results received by the NC State Laboratory of Public Health from 1998-2010, researchers mapped the concentration of 31 contaminants detected in NC well water, many of which are also Superfund priority chemicals. The partnership also led to the development of an online resource for well owners interested in more information about understanding well-testing results, the distribution of groundwater contaminants, and the impact of groundwater on human health.

This project was supported by an ARRA supplement from the National Institute of Environmental Health Sciences (#P42ES005948) 2009-2011.