Over the last decades, access to clean and safe drinking water in the U.S. has become more prevalent in the news cycle. Stories of Flint, Michigan, Inez, Kentucky, and the Navajo Nation have increased the public’s awareness to a startling fact: Access to clean water is not a given for many U.S. communities. Yet, even when America’s water infrastructure is functioning as it’s supposed to, new chemicals that have been artificially introduced to supplies of drinking water may not be filtered out. This exact situation was discovered in the last decade in the Cape Fear River in North Carolina. The situation grabbed the attention of the government, community activists, and scientists, all attempting to ensure that the state’s water infrastructure fulfills its purpose to supply clean water for all residents.

We can contextualize NC’s issues along the Cape Fear River by first taking a quick look at water infrastructure as a whole in the U.S. The essential issue with modern U.S. water infrastructure, ironic though it may be, is the fact that it’s not modern at all. According to PEW Research Center, many of the U.S.’s pipes that carry water are still from the 1800s. Local, state, and federal governments are reluctant to assist with planning and funding for an updated system, and often defer repairs and upgrades for as long as possible. As these systems break down, new crises arise as well, and not all can be fixed by basic updates. PEW points out that a new kind of water crisis is arising in America–the fact that an increasing number of citizens don’t trust their tap water. PFAS, known formally as per-and-polyfluoroalkyl substances, have recently attracted attention since their creation in the 1940s. This group of man-made chemicals helps to manufacture a wide variety of materials, and has meandered its way into almost a quarter of the U. S’s water supply. So, while the government and industries connected to America’s water infrastructure may be thinking “Why fix what’s not broken?” studies surrounding PFAS show that we may not be able to ride on the coattails of old infrastructure much longer.

Issues along the Cape Fear River originally began in 1980 when DuPont, a chemical manufacturing company, set up a factory near the riverbank. Dupont later merged with a company named Chemours in 2015. However, even earlier in 2007, one PFAS known as PFOA was documented for the first time in the Cape Fear. In response to guidance from the EPA, DuPont replaced PFOA with another PFA called GenX in its industrial processes. Due to wastewater practices by the company, by 2014 GenX was detected in Wilmington, NC’s drinking water. This was after all regulated filtration by utilities had been completed. By 2016, scientific studies began to be released, and in June of 2017, local media broke the full extent of the story. Though Chemours stopped releasing GenX through wastewater soon after, the public panicked and concerns about public health began to arise. To find out how legitimate these concerns were, I asked Dr. Jamie DeWitt from the Brody School of Medicine at East Carolina University to discuss her research and some of the science behind what makes PFAS so concerning.

The Human Body + PFAS = A Conversation with Dr. DeWitt

Dr. DeWitt runs the Dewitt Lab in the Department of Pharmacology and Toxicology at ECU, and her research focuses on how environmental contaminants affect the human body. Dr. DeWitt found this niche after completing a post-doc in immunotoxicology. Now, much of her research focuses around PFAS and how these chemicals interact with our immune system. She graciously agreed to sit down with me and answer my questions. I first asked her to walk me through why she focused so closely on PFAS’s relationship with the human immune system. She said that while some of this has to do with her background and expertise, there are also strange interactions occurring between humans and PFAS.

“The essential question boils down to: Can the immune system still do what it’s supposed to do?” said Dr. DeWitt. Her research indicates that PFAS may be preventing certain reactions from the immune system, including suppressing antibody creation. When the immune system is either overcompensates or is prevented from reacting, risks of illnesses and even cancer may increase. This aligns with similar bodies of research that indicated possible increased risks of cancer and other disease in people who have ingested large amounts of PFAS. It is especially relevant now, as COVID-19 may have a stronger impact on people heavily exposed to PFAS.

Beyond her research on health effects, I asked to hear her perspective on why the public and media singled out GenX when this is just one of close to 10,000 individual PFAS chemicals. Dr. DeWitt said that this may have been because DuPont initially designed GenX to be “less toxic” in comparison to PFOA which the company phased out. She said that GenX is also a brand name, and thus much easier for the media and public to remember. GenX also had high concentrations in initial papers released about the Cape Fear River, and she feels that this combination heavily contributed to the concern surrounding this one individual chemical.

Overall, Dr. DeWitt feels that her research will continue to be supported both by the community and other entities in both industry and government. She has engaged as an expert witness against companies who make PFAS, and receives funding from the state’s government. She feels that many people know about this instance in North Carolina because the General Assembly’s promoted research efforts, as well as community activism in the Wilmington area.  This awareness is a positive sentiment, because based off of Dr. DeWitt’s “function-first approach” to her research with PFAS, it seems like there may be a legitimate public health concern for Eastern NC residents.

Community Activism and the Fight for Clean Water

As Dr. DeWitt mentioned, community activism in Eastern NC drew a lot of attention to the situation occurring along the river. Groups such as Cape Fear River Watch and North Carolina Stop Gen-X In Our Water host community events, river clean-ups, and educational awareness campaigns to force Chemours and NC regulators to take further action to reduce PFAS levels in drinking water. These residents have a right to be concerned, considering that one nation-wide study conducted on PFAS levels in tap water identified an elementary school in Brunswick County, NC as having the highest levels in the nation for the locations tested, which can be seen in the graph below.  Although PFAS levels have dropped sharply since Chemours stopped discharging its wastewater into the Cape Fear River, there still is a lower amount that remains in the water, likely coming from runoff and what is being released into the air. Though the levels of PFAS are lower, many community members still won’t touch their tap water. Many people still feel that the possible danger is being overlooked, and that their community left behind to deal with the aftermath. 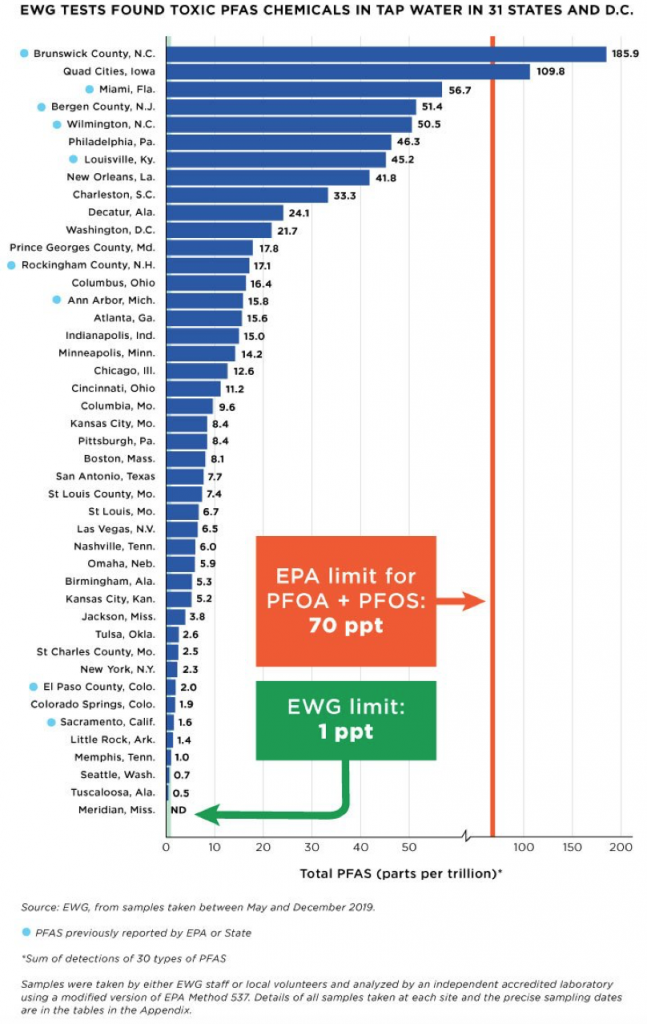 As Dr. DeWitt discussed with me, the central concern here is that these chemicals don’t break down in the environment naturally. To make matters worse, our current water infrastructure doesn’t filter them out. Residents of these communities must install extra filtration systems in order to receive the guarantee of safe drinking water. This led me to consider two questions. One of these questions was raised by Dr. DeWitt, who said “Why are we designing chemicals that aren’t sustainable in the first place?” The other question built off of the one posed by Dr. DeWitt: How do we redesign our water infrastructure to fit these new discoveries? It seems to me that the answer lies at the center of science, proper government support and funding, and the communities that need this updated water infrastructure the most.

Written by Sarah Padyk, a UNC junior and Cleantech Corner intern from Sylva, North Carolina who is majoring in environmental sciences with a minor in media and journalism.

*Author Note: I cannot thank Dr. DeWitt enough for speaking with me about her research and perspectives surrounding PFAS in NC. *

Hogue, C. (2019, April 7). The hunt is on for GenX chemicals in people. C&EN. https://cen.acs.org/environment/persistent-pollutants/hunt-GenX-chemicals-people/97/i14.