At this year’s UNC Clean Tech Summit there will be a special plenary session titled Climate Change Considerations for Future Prosperity and Security. I had the privilege of interviewing one of the panelists, Lieutenant General Richard P. Mills, about his perspective and thoughts on the climate situation.

Lt. Gen. Mills is the president and chief executive of the Marine Corps University Foundation and served five tours of duty in the state of North Carolina, among various other military achievements.

He plans to discuss how the climate crisis will impact us from a national security standpoint. Mills said that national security has already been potentially impacted at the hands of climate change. Due to Arctic ice melt accelerated by climate change, the Arctic is now accessible for military and commercial transport more months out of the year than usual, and we are getting close to year-round access. The area is not typically monitored by the US military, but now may have to be. 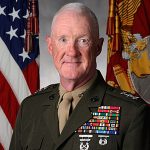 Mills said that we can expect to see more competing interests between the US and Russia and China in this area in the years to come. The land holds potential for many natural resources and the US currently holds little infrastructure to protect the area. “Russia has 40 icebreakers – the US has two,” said Mills.

Mills also predicts that conflict over natural resources will spawn as a direct result from climate change. Conflicts over food, water, and land may break out in areas like Africa and the Middle East, an area where the US has interests. Mills said that a colleague of his believes that one of the factors in the start of the Syrian Civil War was a ten-year drought in the area.

Mills says that in order to combat this issue, we must come to terms with its importance and urgency. “Someday this may not be a ‘nice to have,’ it’ll be a ‘must have,’” said Mills in reference to practices of clean and renewable energy. He also mentioned an experiment done with US Navy ships and using renewable fuel, claiming it was very expensive. Mills stressed that innovations in clean technology are becoming increasingly important in order to ensure national prosperity for years to come.

Want to learn more about climate change and national security or our plenary session? Register for the 2020 Clean Tech Summit today: https://ie.unc.edu/cleantech/registration/