Increasing urbanization and the need for denser cities are making developers around the world wonder: how do we revitalize our cities? Greenway-oriented development is the future of mid-sized and developing cities around the world. Dabney Sanders and other members of Action Greensboro quickly realized this when discussing how to counteract increasing suburban flight in Greensboro, and the spread of department stores and businesses to the suburbs.

In the early 2000s, Action Greensboro, a nonprofit founded by six local foundations in Greensboro, noticed the decreasing economic vitality and quality of life, and the loss in manufacturing in their city. They hired the Cooper Cary Center for Connective Architecture in Atlanta to brainstorm how to bring their city back to life. Among three ideas, including the possibility of shifting a baseball stadium and building a central park, the Downtown Greensboro Greenway emerged as the most attractive solution. Many of the committee members looked at other prominent cities like Washington D.C. or New York City for inspiration and noticed a common theme: a natural gem, like a river or waterfront, that development emerged around. A greenway provided the opportunity for Greensboro to have the same.

The Downtown Greensboro Greenway is a four-mile designated pedestrian and bike path around downtown Greensboro. It is a public-private partnership between the nonprofit, Action Greensboro, and the City of Greensboro that aims to connect many of Greensboro’s famous national parks and historically black neighborhoods. The west side of the greenway is a former railroad near a retail and commercial corridor, and the east side takes part of a six-lane highway near Murrow Blvd. The goal is for the greenway to be a hub that connects trails on the outer edges of the city, creates a safe and sustainable route for pedestrians and biking to increase accessibility to the city center, and incentivizes development. So far, it has successfully done that. 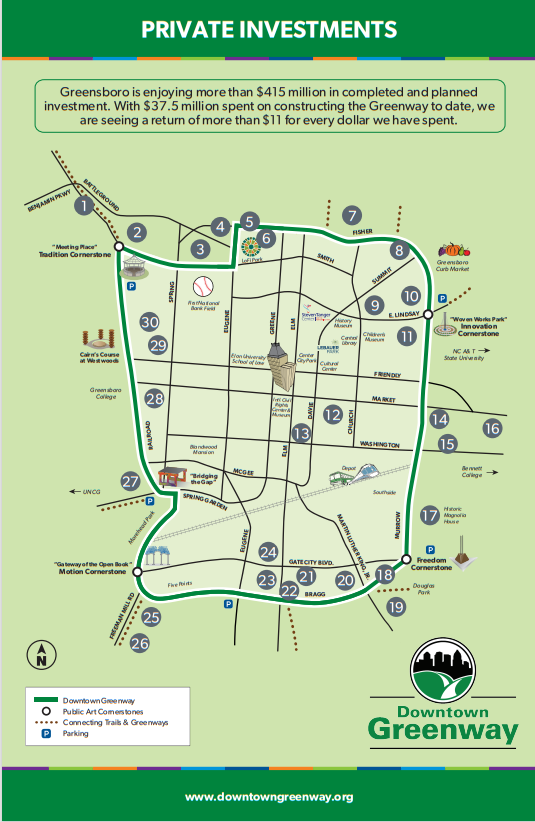 Already, the greenway has become a connector for historically marginalized communities, natural parks, and new businesses that have emerged due to the greenway. The Atlanta Beltline and other greenways across the country have proved how greenways historically attract economic and commercial development. Greensboro has followed the same trend, with over $415 million in completed and planned investment around the greenway. This has resulted in a trend of more than $11 returned for each dollar invested in greenway development in Greensboro.

However, with increasing development around the Greenway, particularly near historically black neighborhoods on the east side near Murrow Blvd, gentrification becomes a necessary part of the conversation surrounding greenway development. Dabney Sanders of Action Greensboro described the development of Murrow Blvd by saying, “I think that there’s no question that that highway was a racially-motivated infrastructure project. It served as a divider from East Greensboro, which is primarily African-American communities from the downtown as a real separator.” She continued to speak on the transformational effect the greenway has already had by, “providing this kind of connectivity and this cycling and walking path that has helped break down that divide that highway provided.” Today the Downtown Greensboro greenway is serving as a solution to tear down remnants of racist urban planning from the Jim Crow era. However, intentional efforts in terms of what businesses are being promoted by greenway development and whether those businesses are accessible and beneficial for local residents is important to prevent the greenway from pushing communities out through gentrification in years to come.

The Downtown Greensboro Greenway is scheduled to be completed by 2023. Greensboro joins a number of cities across the country investing in biking and pedestrian paths to improve physical and mental health and normalize alternative sustainable modes of transportation. Organizations like the East Coast Greenway Alliance are working to expand greenways across the country to normalize outdoor designated spaces that will define cities of the future.

Learn more about greenway-oriented development and meet Dabney Sanders at the 2022 UNC Cleantech Summit on March 29-30 at the Friday Conference Center in Chapel Hill, North Carolina.