We started the day with a visit to Seoul’s new City Hall, constructed in a way that overshadows the former one with modern curves and glass. When construction began, ruins from the Joseon dynasty of Korea were discovered under layers of sediment. Rather than demolish or relocate them, a decision was made to integrate that history into the design of the public portions of the building. We walked through a small museum in the basement and learned about the former use of the space as a retaining wall for a stream, and later as a weapons storehouse. Next, we climbed up a spiral staircase and began to explore the first floor. It includes information on sustainability initiatives in the city, like smart water policies, as well as a massive green wall full of plants that extended up the seven stories of the building. Additionally, we looked a small model of the Demilitarized Zone (DMZ) that recreated the meeting between Kim Jong Un and Moon Jae-In met in 2018. Our guide, Jeong, explained that many Koreans long for unification between the two Koreas, which could make Korea one of the strongest countries in the world. 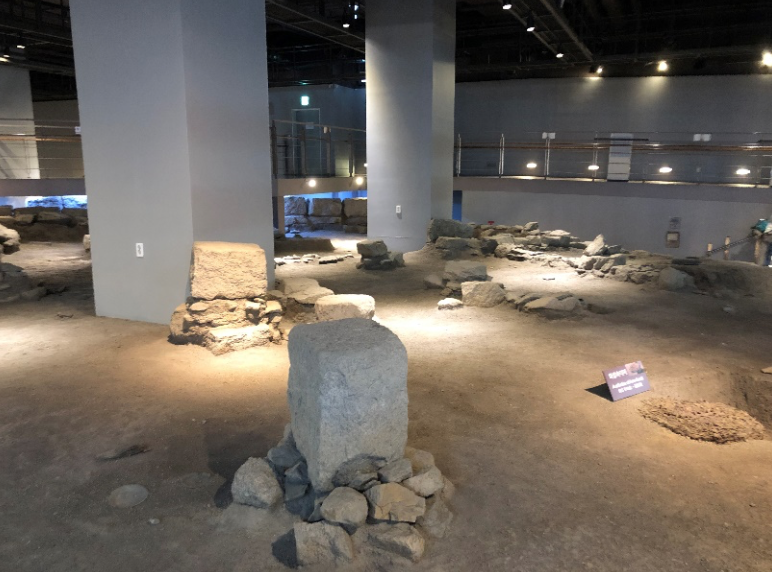 Ruins from the Joseon Dynasty beneath the new City Hall in Seoul now serve as an informational exhibit.

Next, Jeong took us to Seoul’s former City Hall, which currently functions as the metropolitan public library. We kept quiet so we would not disturb the many people reading in its halls. We climbed several flights of stairs to reach the former location of the mayor’s office, where we took photos and learned about some of the most pivotal movements in modern Korean history (since the war). After everyone got their picture in the mayor’s seat, we exited the building and gathered near Seoul Plaza, a large green space used for hosting events. During our stay, the plaza was being used for an annual drum festival.

We walked through Seoul plaza over to a different municipal building, where a representative from Seoul Smart City was waiting to tell us about the policies the city is implementing. Rather than focusing solely on technology, she explained that Seoul is taking a holistic approach to smart city infrastructure that includes cameras and sensors, electronic voting, and blockchain technologies. Cameras and sensors are publicly displayed across the city with the goals of improving safety and reducing traffic violations. Cameras are one of the reasons that Seoul currently boasts crime rates much lower than many large cities in the United States. Electronic voting is currently used during public events to gauge citizen thoughts on certain aspects, like timing, size, cleanliness, and more. This feedback can be used to improve events in the future. There is even a yearly vote that takes place during which citizens can vote on an event that will use public funding set aside for this purpose. Electronic voting is still not used for elections, but a citywide adaption of blockchain technology could change this. Blockchain technology can encrypt data securely, which may make electronic voting for elections a reality in the future. Visiting the Smart City Seoul office was a great way to learn about the many ways that Seoul’s government is trying to adopt smart policies that increase safety and citizen happiness.

After the visit, the rest of our day was free for us to do as we pleased. I split off into a smaller group that went to the Gwangjang Market, which includes food stalls, gift shops, and clothing shops. Some of the food stands were even featured on Netflix’s “Streetfood,” a show about food from different places in the world. We split up and ate noodles, assorted meats, bean pancakes, and desserts. It was a satisfying end to an engaging day that we all enjoyed.