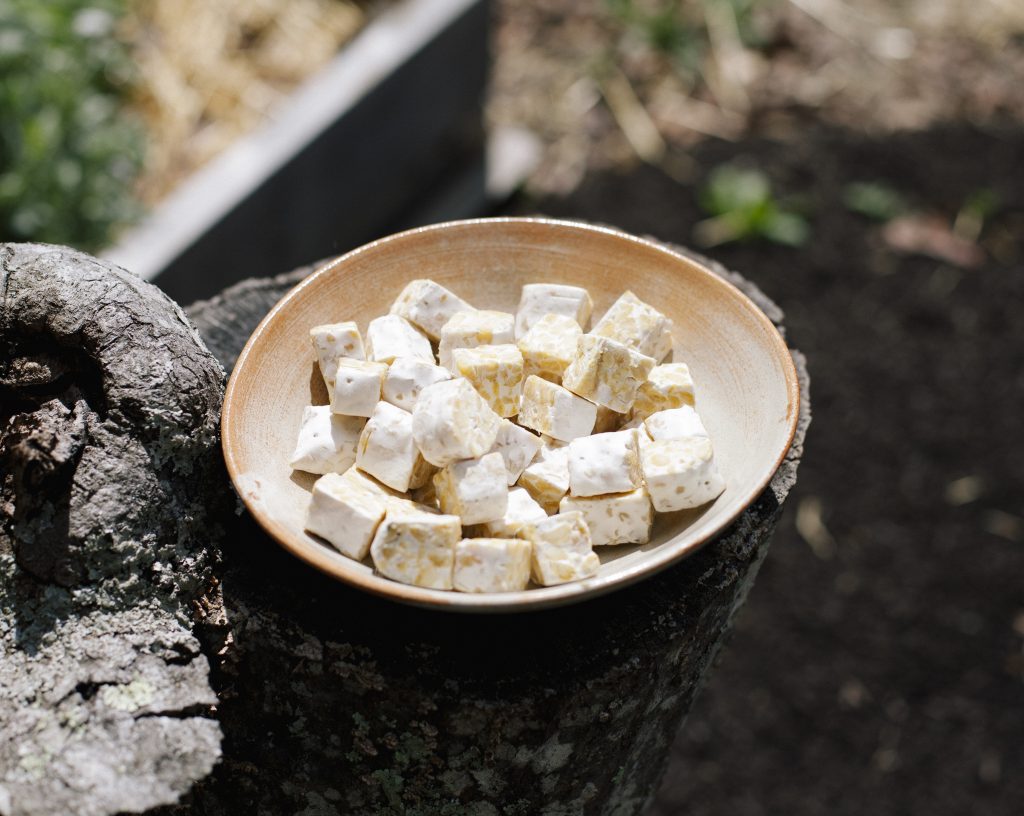 From bean to block, Taylor Westbrook is combining fermentation with artistry to create a unique product representative of a more sustainable food-future.

Tempeh is a fairly foreign product to American consumers. I came to know it as a lot of other plant-based eaters, being an alternative protein source. Found in the tofu section of most grocery stores, it is commonly sold in thin blocks made of pasteurized fermented soybeans. However, a local North Carolina company is expanding this limited description and exploring tempeh’s possibilities by making hand-crafted products tasty (and nutritious) for the vegan and meat-eater alike.

It was my pleasure to interview Taylor Westbrook, chef and founder of By the Brook Tempeh, who described the inspiration, production and future of his brand. I feel his story is an important one, displaying local entrepreneurship that values community and promotes sustainability.

A Journey to Fermentation

From hot-dog cart owning aspirations in elementary school, to memories of making Italian food with his mom, Taylor has always had a sort of food enthusiasm. After going to college for studies in tourism, and realizing it wasn’t for him, such enthusiasm pushed him into the kitchen where he’s built his brand and continues to progress. He was first introduced to fermentation when acting as a chef at different farm-to-table retreat centers, and from there was able to participate in a fermentation residency at the highly respected fermentation school of Sandor Katz in Liberty Tennessee. It is during his residency that he tasted unpasteurized tempeh, which sparked his interest from both an entrepreneurial and creative perspective.

Recently an active space in the food scene, fermentation has become increasingly popular for its microbial gut-aiding properties, and unique tastes. Moreover, utilizing fermentation to create ‘live’ products gives foods and beverages a certain ‘cool’ factor that is particularly intriguing to foodies and younger generations of exotic eaters, myself included.

Kombuchas, sourdoughs, and craft ales are becoming more numerous in the Triangle with increased consumer interest in the health, taste, and aesthetics of fermented products. However, tempeh was an untapped area of fermentation in which Taylor found his niche. “Not a lot of people are doing tempeh in the United States,” Taylor said, which made his business stand out in the fermentation scene while also staying relevant in the times of growing, as he put it, “plant-based and vegan energy.” Meaning, tempeh seemed to hold more importance in terms of nutritious possibilities when compared to beverages or bread.

Creatively, tempeh felt natural for Taylor. He liked its origin story, production process, and possibility, all of which are exhibited by his brand. Using beans other than soy, Taylor experiments with different combinations in creating several variations of tempeh. French lentils, pinto beans, and adzuki beans are three examples of legumes he uses to create his products, contrary to commercialized tempeh often only using soy. Each variation has a distinct profile, giving consumers and chefs the ability to experiment with the textures and tastes across his product line. 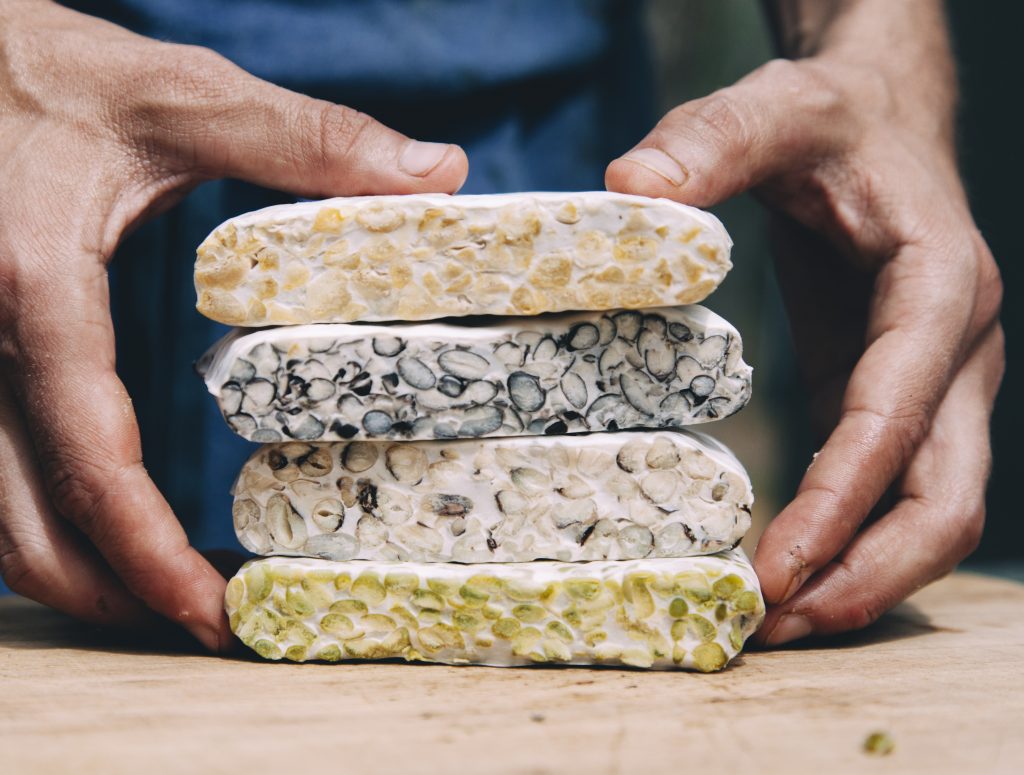 Currently he has three flavors, Appalachian, Coulee, and Silk Road, all of which he strategically named to tell a story. He describes that when he mixes it up with different bean blends he’s able to bring a story to it and treat it in a special way, “It’s not just a plain cake that you can throw whatever at and cover with barbeque sauce. Each bean has its own texture, maybe some nuttiness and subtleties, and people can start to learn what different beans taste like through the fermentation process.”

Moreover, he was fascinated by the concept of movement to tell these stories. “Beans are moving everywhere,” he said, “and have supported different trades and dynasties throughout history.” From this, he picked the names of his tempeh respecting movement and travel of the beans compiling each variation. “It’s been fun,” he told me. Though he acknowledges the risk of the abstract names, as they could possibly be confusing or unappreciated by some consumers, he stands by his decision and thinks such will translate with restaurants and people who value that kind of artistry.

The Artistry of Fermentation

To completely understand the artisan value of By the Brook Tempeh, it is important (and compelling) to describe his production process.

Currently Taylor is running his business on his own with the support of his fiancé (and “wordsmith”), in addition to the help of chefs, mentors, and friends within the industry. Fermenting autonomously from a retrofitted trailer behind his house, he incubates Rhizopus oligosporus (a mushroom culture) to initiate the enzymatic transformation of his products 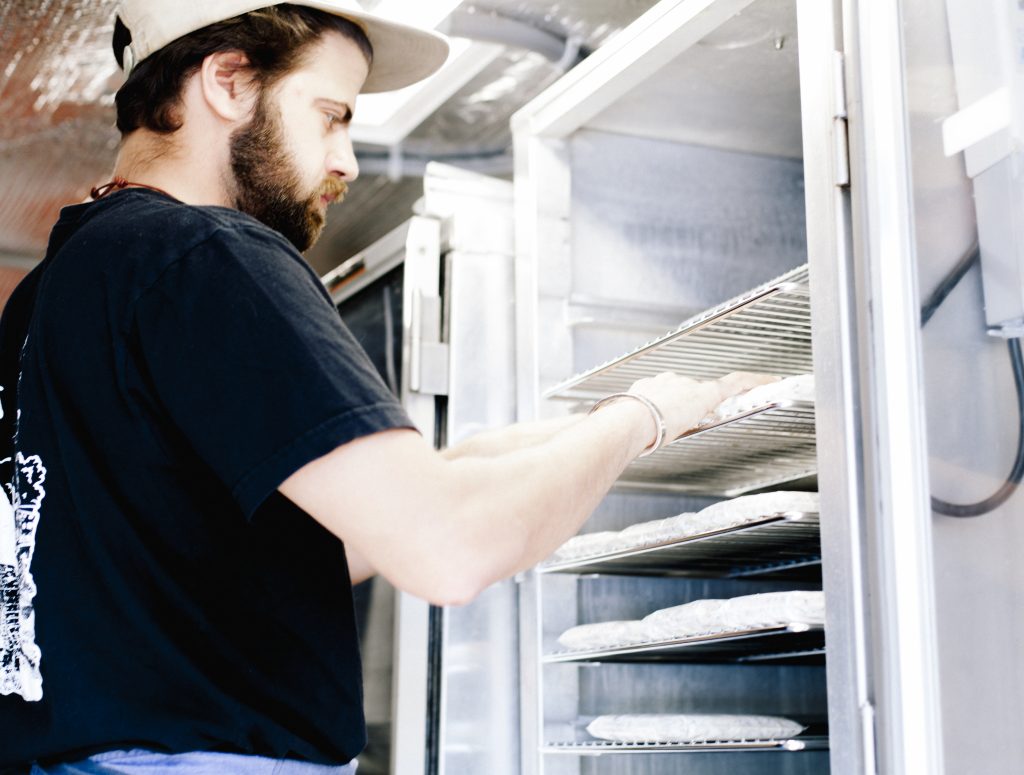 First, he sources the ingredients: beans, vinegar, and starter culture. Then, the skins of the beans are either cracked or left alone. Taylor has an analogy that tempeh makers are either doing “smooth or chunky tempeh.” With chunky tempeh the skins are left on, which results in an easier production process that is less time consuming. However, Taylor is pre-cracking dry beans before soaking them. They soak for 12-24 hours during which bacteria produce lactic acid via anaerobic respiration and spontaneous fermentation; this process is known as the first fermentation. As the temperature of the water is raised the hulls (the outermost layer of the beans) are removed, resulting in a smoother, more digestible texture. From this point the beans are boiled until they are al dente, meaning they are squishy but not mushy, and dried for 15-20 minutes before being inoculated. It is during inoculation when the beans are introduced to mushroom culture. Taylor also noted that vinegar may be added before drying the beans to stabilize the pH.

The beans are then added to a perforated bag so the product can ‘breathe’ throughout the proceeding heating cycle. This allows sufficient aeration for the Rhizopus oligosporus to grow on the beans and encase them in a white mycelium that allows tempeh to hold together in its characteristic ‘cakelike’ shape. The beans and fungi are left to themselves (and biology) in a fermentation chamber, where the tempeh starts at a high temperature and is gradually cooled overtime until it reaches refrigeration temp. It is then packaged and sent to stores and farmers markets, about a 72-hour production process in total.

Curious, I asked, “Is it a pretty temperamental process?” 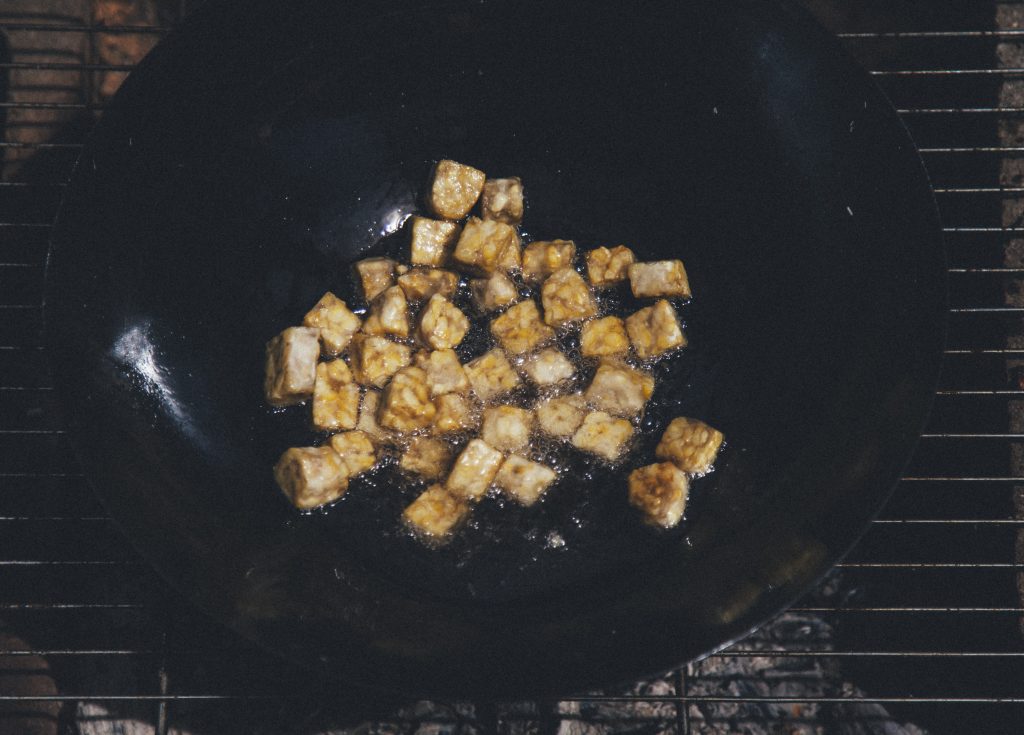 “Yeah,” Taylor said, “which is probably why most people don’t do tempeh.” It’s more active than other ferments and can reheat on itself once it’s cooled down, making it dangerous to consume and a little scary to inspectors. “Unpasteurized tempeh has its own lifeforce,” and as a live product can start consuming itself if left unopened in a fridge for too long. He compares it to a sourdough bread, which gets moldy if left on the counter too long. Most commercial tempeh is pasteurized which stops the fermentation process early and kills some of the healthy bacteria. However, Taylor is dedicated to producing unpasteurized tempeh because he feels in maintaining its freshness it is significantly higher quality. It embodies a sort of “taste to place” that results in a more enjoyable and tastier product. Pasteurizing his tempeh, though easier to ship everywhere, would jeopardize the product’s freshness and feel wrong for his brand.

What are the next steps for By the Brook Tempeh? While Taylor has built an impressive brand, it is evident he sees an expansive possibility for it and the future of fermentation in general. The sort of growth he wants to emulate though, feels contradictory to an industrialized mindset prioritizing profit over sustainably. In producing raw unpasteurized tempeh, he describes his product to feel inherently more local which is why he hopes to keep his business at a smaller-scale community level. He likes having sovereignty of By the Brook and will continue to do the bulk of his work until things become unmanageable. In fact, he would like to see more competition in the fermentation space, particularly with tempeh. “I would like there to be more tempeh makers in the Triangle and in cities across the States… I would like to see it become as popular as sourdough bakers,” said Taylor, which he believes would help normalize tempeh for consumers. He hopes to prove that you don’t have to be vegan (as he himself isn’t) to enjoy tempeh. “I want to see tempeh on carnivores’ plates as something that isn’t taboo or a ‘vegan thing,’ but just something that is healthy and tastes damn good”, which is why he wants to continue taking steps toward making tempeh more approachable and accessible for those foreign to the product. Post-COVID, he thinks offering hot samples to customers at markets and co-ops is convincing enough to get people intrigued. Moreover, he wants to continue partnering with restaurants that know how to prepare his product so there can be more opportunities in which people are introduced to tempeh.

Preparing tempeh isn’t mechanically difficult, but he acknowledges that working with a new food product can feel daunting and overwhelming. In continuing to make his product less threatening he wants to expand the recipe database on his website and increasingly provide resources through it and his social media. On a similar note, a potential passion project of his would be to create a cookbook showcasing diverse and fun ways tempeh could be used, encouraging people to think out of the box. Recently, he has also been selling his tempeh in a marinated burger form, which he told me has been selling really well. Taylor wants to continue flavoring and marinating the tempeh because he feels it could make some hesitant consumers more comfortable.

From a sustainability perspective, Taylor is always looking to improve. He currently sources some of his beans from Anson Mills (a mill in South Carolina dedicated to sustainable grain, legume, and seed production), and hopes to continue building relationships with local millers looking to follow similar models. He is also trying to minimize the use of plastic in his tempeh production and packaging. There is a way to ferment without plastic, using a sheet pan method, but he would need more space. Thus far though, he has been able to reduce one piece of plastic by packaging the product in paper bags. 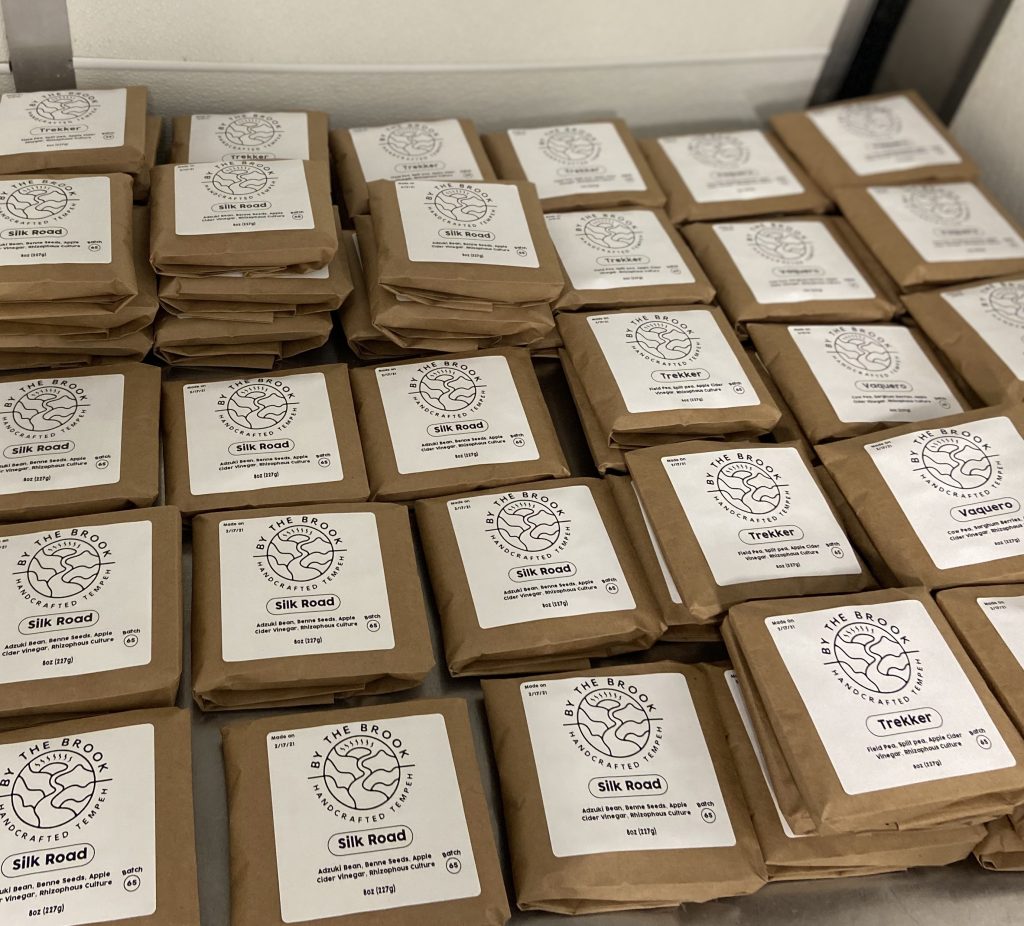 Beyond what has been discussed, Taylor has even more ambitions for his brand. He hopes to possibly dive into other forms of fermentation to produce products other than tempeh (he’s particularly interested in koji, a fermentation process used to make soy sauce and miso). Moreover, in a perfect world he would love for his brand to become a “holistic organism” that holds space for others involved (or longing to be involved) in the fermentation community. Specifically, those who may lack the required equipment, which can be cost prohibitive, or who learn best from hands-on collaboration. He dreams of building a coworking and educational space for others: a sort of fermentation school meets commissary kitchen. “Maybe could be empowered by my business…I’d love to start inviting local fermenters to work beside me, where we can learn from one another.”

This concept is representative of not only his character, and the character of his business, but to a future of greater local development and flourishing communities.

In continuing to support Taylor and his mission, visit his website, social media, and try his products! The places that carry his tempeh and all ordering information are clearly organized under the ‘purchase’ tab of https://bythebrooktempeh.com. Furthermore, if you would like to be treated to images of glorious food and behind the scenes moments, follow him on Instagram @bythebrook_tempeh. 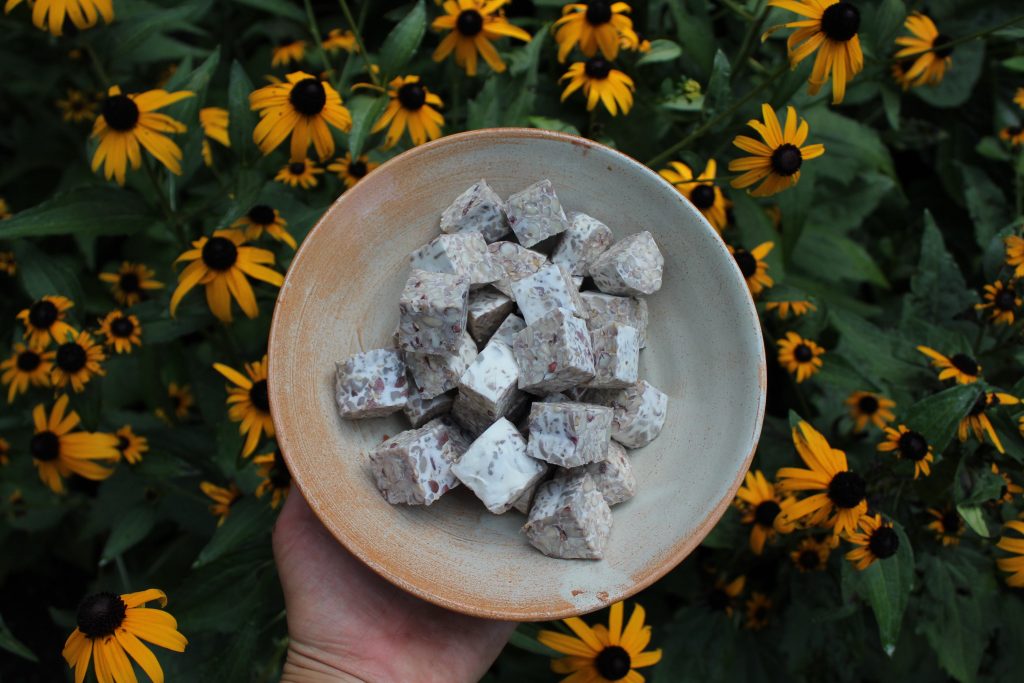 I thank Taylor for graciously allowing me to interview him, during which I probably responded with “Wow…that’s so cool” a gazillion times. I double thank him for giving me the opportunity to write about his story and brand, and hope others are just as inspired as I am.