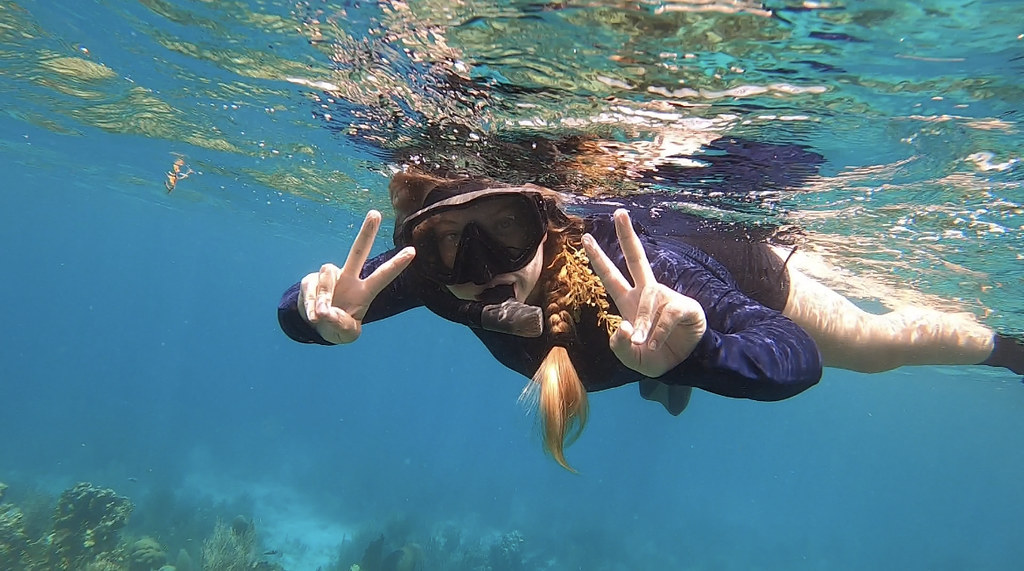 Through a UNC Institute for the Environment field study program called UNC Coral Reef Ecology in the Caribbean, 16 UNC-Chapel Hill students were able to visit St. John, one of the U.S. Virgin Islands, led by Brian Naess, a Geographic Information System (GIS) analyst at the Institute for the Environment and lecturer. The 17-day class ran from May 14-23 and has been offered since 2002. The program was originally led by Greg Gangi, associate director for clean technology and innovation at the Institute and teaching professor.

“The primary goals are to understand the basic ecological processes of coral reefs and mangroves and sea grass beds,” said Naess. “When we’re down there, we focus a lot on species identification – learning to identify all the different fish, creatures, and coral that we’re seeing underwater.”

According to Naess, every species that has been identified by students has been documented; these notes are compiled into one species list that has been a work in progress since the inception of the class in 2002.

“Every year we add a few more to the list and it’s interesting to see some of the changes over time due to climate change, due to hurricanes, or due to bleaching,” said Naess.

“Two-thirds of St. John is a national park and waters around St. John are national monuments as well. A lot of the island is protected from development and is more or less in its natural state,” said Naess. “Honestly, it’s one of the most beautiful places on the planet. It has just amazing beaches and has pretty spectacular topographic changes,” said Naess.

This protection of St. John’s beautiful landscapes, as well as some more pragmatic factors – U.S. citizens don’t need a passport to enter the island and it uses the United States dollar – have made St. John a logical choice to host the program for many years. Unfortunately, the island was devastated by Hurricane Irma in August of 2017 and Hurricane Maria only a few weeks later. These storms, which caused widespread destruction and damage to the island’s infrastructure, came only a few months after the conclusion of the 2017 class.

“The campground where we stay at, Cinnamon Bay Campground, was completely destroyed in the hurricane,” said Naess. Because of this, as well as the COVID-19 pandemic, the program was unable to return to St. John for several years. However, these setbacks only made the return to St. John even more rewarding.

Following the conclusion of the 2022 class, Brian Naess has been conducting GIS research on air quality issues and is currently studying transportation-related emissions. He also co-directs the EcoStudio, a UNC-Chapel Hill program that helps undergraduate students obtain sustainability-related internships. Even with his research and responsibilities with the EcoStudio, Naess is already looking forward to next year’s class.

“I will definitely be doing this class again next year,” he said. “It’s one of my favorite things in the world to do.”

The 2023 program will be held May 17 – June 2, 2023. Applications will be accepted beginning November 15 through the Study Abroad site heelsabroad.unc.edu. Search “coral” for UNC Coral Reef Ecology in the Caribbean.

Story by Matthew Ng
Matthew Ng is a student at UNC-Chapel Hill. A native of Raleigh, North Carolina, Matthew is currently a junior pursuing a double major in journalism and political science. Outside of his work as a communications intern for the Institute for the Environment, he has experience in documentary storytelling and reporting on Chapel Hill local politics. After graduating in 2023, Matthew plans on attending graduate school.
Comments are closed.