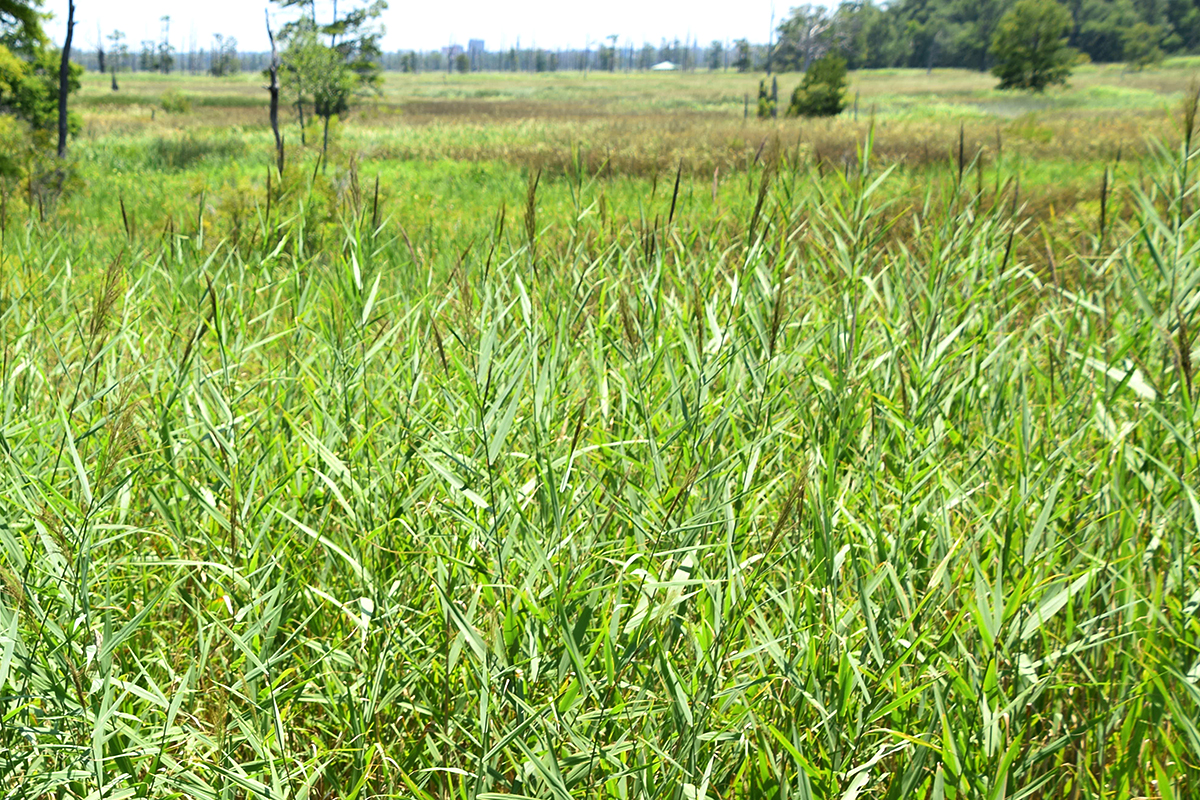 Phragmites australis (P. australis), an invasive marsh grass that many consider a nuisance along the North Carolina coastline, may have surprising benefits, according to new research conducted by Mollie Yacano.

Yacano is currently a graduate student at the University of North Carolina at Chapel Hill, studying marine sciences with an emphasis on coastal biogeochemistry. She recently completed research that analyzed P. australis’ impact on the nitrogen cycle within North Carolina’s coastal marshes. Read full paper.

Yacano analyzed multiple plots of marshland along the coastline with P. australis to determine how the plant impacts nitrogen cycling. She is interested in this aspect of the plant because of how excess nitrogen can impact coastal waters. Her results can be used to estimate the monetary value of denitrification associated with the invasive marsh grass. 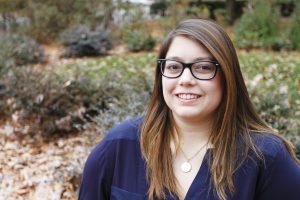 “It’s interesting to me because humans have changed the nitrogen cycle a lot as we put nitrogen in our fertilizers,” Yacano said. “You couldn’t grow enough crops to support the current population without the nitrogen that is added to fertilizers, but a lot of the excess nitrogen ultimately ends up in coastal marshes and waters.”

When describing the balance of nitrogen levels, Yacano said: “If you don’t have enough nitrogen, nothing is going to grow; but if you have too much nitrogen, it’s going to cause cascading negative impacts.” Research results showed that P. australis performed denitrification, a measurement of nitrogen removal capacity, at a similar and often higher rate than native species. Yacano said that higher denitrification levels are notable because when too much nitrogen ends up in these coastal ecosystems, it can cause harmful algal blooms and low oxygen events.

Evidence also suggested that P. australis may be able to remove additional nitrogen when it when it is delivered to coastal systems in pulses, such as in runoff from large storm events. Yacano said that the goal was to simulate storm events to see how the marsh responds. The invasive species showed an increased ability to remove nitrogen from the ecosystem, especially at marine tidal sites.

“After Hurricane Florence in 2018, there was a temporary decrease in water quality along the coast, because eastern North Carolina has a high density of agriculture and livestock operations,” Yacano said. “A lot of that waste was getting flushed into coastal waters, and so we were interested in looking at whether P. australis could mitigate elevated nitrogen resulting from the storm.”

Prior to coming to Carolina, Yacano worked in a lab that focused on similar research as an undergraduate at Boston University. Because of these similarities, she said that coming to UNC for graduate school was a natural progression for her education. Her initial contact with her current adviser Mike Piehler, a professor and researcher at UNC-Chapel Hill, solidified her decision to transition from New England to North Carolina.

Her research on P. australis began soon after she arrived at Carolina in the fall of 2017. Yacano said that once she narrowed her interests, she applied for a grant from North Carolina Sea Grant and the Albemarle Pamlico National Estuary Partnership. She received the funding, and her research officially began in the summer of 2018.

“It came organically,” Yacano said. “It’s been a really cool opportunity because it’s given me a lot of ownership of my project to keep asking questions and to keep applying for these smaller grants to see what else we can look into.”

Yacano noted that Piehler has played a vital role in this research.

“I feel really fortunate to have Mike as an adviser because I’ve never felt pigeon-holed in my project; I’ve always felt like if I have an idea that I can come to him,” Yacano said.

Piehler has enjoyed mentoring graduate students over the years. He and Suzanne Thompson, the lab manager at the Institute of Marine Sciences that Yacano works with, have guided students’ research together for years.

“My research lab at the Institute of Marine Sciences is such an important part of my professional life. I have been immensely fortunate to have amazing graduate students like Mollie, and we are all fortunate to have Suzanne Thompson as a colleague. Suzanne has been the bedrock of our lab since its inception,” said Piehler.

With the help of Piehler and Thompson, Yacano’s results can be used to estimate the monetary value of the denitrification process that P. australis has in its ecosystem.

“It’s a really useful way to look at the relative importance of what we’re seeing in the system beyond just ecosystem function,” said Yacano. “Because showing that it has this monetary value along with its ecological value can make it more impactful, particularly regarding policy decisions.”

Showing these benefits is especially important as there are continual attempts to remove P. australis from coastal marshes. Yacano said that people often spend a lot of money attempting to remove the invasive species to little avail. This is one of the reasons why she is passionate about analyzing the possible benefits of the plant.

“When it comes to invasive plants, it’s usually not as simple as, ‘It’s bad, let’s try to kill it,’” Yacano said. “Also, we are often unsuccessful when trying to eradicate it. So, it begs the question: Why are we spending a lot of money and potentially causing more damage to the marsh, just to have it grow back?”

Beyond the plant’s effect on the nitrogen cycle, the invasive marsh grass could positively impact coastal resilience as climate change increasingly threatens North Carolina coastlines. According to Yacano, P. australis is already stabilizing vulnerable shorelines in Louisiana. She is in contact with other researchers that are looking at the grass’s benefits with erosion and the plant’s stabilization capabilities.

Yacano is now investigating how the marsh grass systems function in a new project, focusing on how the plant reacts after measures are taken to eradicate it. She feels that this will be important because understanding the plant’s reactions will help form a more complete look at possible management strategies for the species. Yacano and her advisers are determined to continue studying P. australis to gain more information about the plants functionality on North Carolina’s shorelines and beyond.

“I think at the end of the day, a marsh with an invasive plant species growing in it is preferable to a marsh that doesn’t exist anymore,” Yacano said. “Like most things, I don’t think it’s a simple management solution, but I do think there haven’t been enough comprehensive looks at what the plant is doing.”