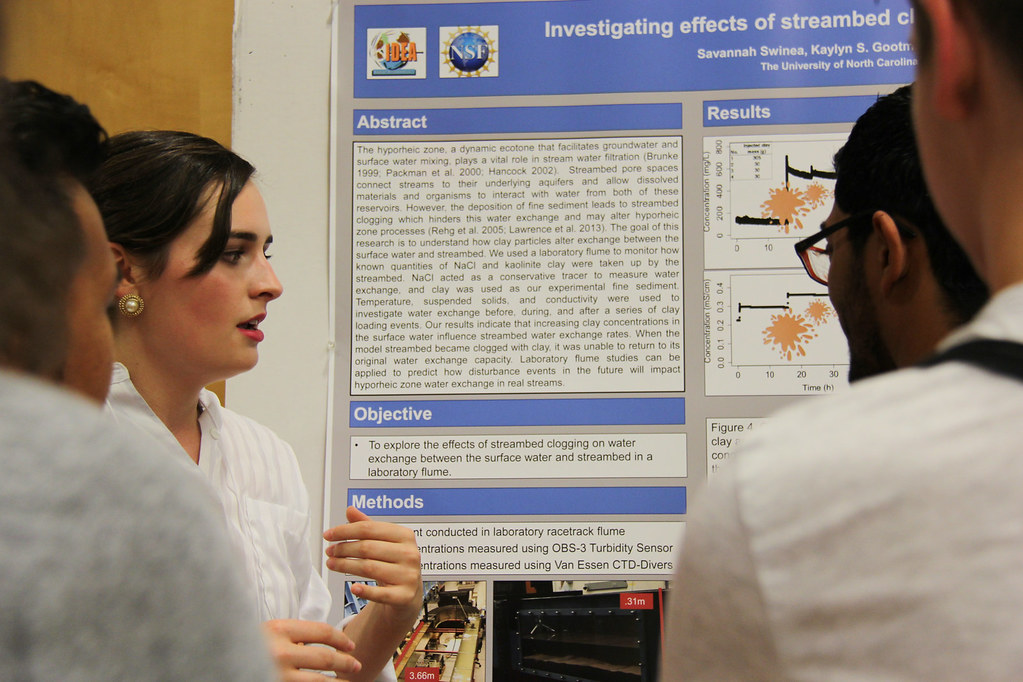 On July 28, 2017 hundreds of people filed into the Sonja Hayes Stone Center at UNC-Chapel Hill for the annual Undergraduate Pipeline Research Symposium. Nearly 150 undergraduates from UNC and universities around the country presented posters at the event, highlighting the research they spent the summer completing.

Eleven of those scholars were from IDEA 2.0, a program that that aims increase diversity in academia and is led by Program Coordinator Megan Hughes and Principal Investigator Kathleen Gray, both of whom are part of IE’s ERP Environmental Resource Program.

The 11 students have logged over 3,000 research hours this summer.

Megan Hoert Hughes says that day-to-day guidance from mentors, along with support from other members of the IDEA cohort, is crucial for students participating in the program.

“If we can provide appropriate support,” says Hughes, “and remove some of the barriers that students, especially women and URM [underrepresented minority] students, sometimes encounter along the path to becoming a geoscientist, we will have a geoscience workforce that better reflects the people of the planet.”

Jared Richards placed third in the poster presentation awards for his work with Karl Castillo and John Rippe, both of the Marine Sciences department. Richards, a rising sophomore biology major, presented a poster titled, “Quantifying macrobioerosion within two coral taxa and across three reef systems in the western Caribbean Sea.”

Richards’ research focuses on determining how coral reefs are impacted by human activity, accounting for differences between coral reef species and proximity to shorelines. The team’s ultimate goal is to help establish a foundation for determining the impact of climate change on coral reefs.

Two other stand-out students from the program are Savannah Swinea and Christina Lim.

Christina Lim, like Savannah Swinea, is also an environmental science major and rising junior. She presented the poster, “Kraken the host-symbiotic relationship between the Atlantic Brief Squid, Lolliguncula brevis, and bioluminescent Vibrio species.”

Alongside Alecia Septer and Stephanie Smith of the Marine Sciences department, Lim explored whether the Atlantic brief squid (Lolliguncula brevis) has potential to act as a host for bacteria. The Hawaiian bobtail squid (Euprymna scolopes) is typically used as a model for symbiotic relationships, but the Atlantic brief squid provides a more accessible alternative.

During the 2017-2018 academic year, students participate in a series of Saturday Intensives to introduce them to geoscience research happening throughout the Triangle and beyond. Each experience is planned so that UNC and NCCU geoscience students have a chance to interact with researchers and environmental professionals and learn more about real-world experimental design, data management, and skills and tools necessary for scientific investigation.

IDEA 2.0 is funded, in part, by the National Science Foundation’s IUSE: GEOPATHS program, which aims to make STEM education accessible to all.