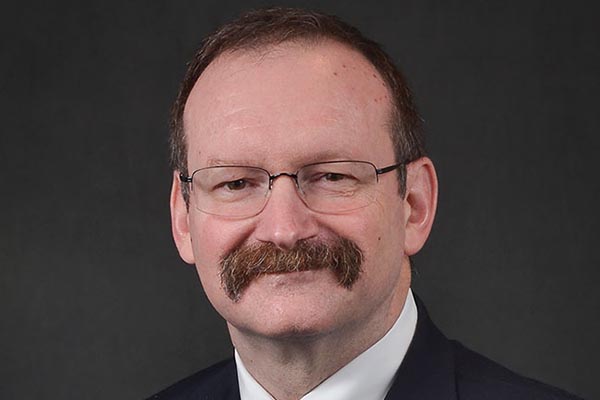 Dr. David B. Peden, an expert on the human health effects of air pollution, has been named interim director of the UNC Institute for the Environment. His term begins July 1. Peden replaces Lawrence E. Band, who recently accepted the Ernest H. Ern Professor in Environmental Sciences and Professor in Civil and Environmental Engineering at the University of Virginia. Read more about Band’s departure.

“As the interim director of the Institute for the Environment, Dr. Peden will oversee the Institute’s activities in interdisciplinary research, outreach, and engagement that address pressing environmental issues facing communities in North Carolina and throughout the globe,” said Vice Chancellor for Research Dr. Terry Magnuson. “Dave’s dedication and passion for this work will make him a great asset to the Institute.”

“Being a doctor, what I bring to the equation is a direct appreciation of how environment affects human health,” said Peden. “The areas that we can capitalize on and part of my excitement in taking on this role is that there is strong expertise in the IE. We can really capitalize on putting those strengths together. It is increasingly clear that to achieve improved human health, we really need all those skill sets working together.”

As current president of the American Academy of Allergy, Asthma & Immunology (AAAAI), Peden is focused on environmental and climate impacts on allergic and immunologic disease.

Peden’s research in general is largely rooted in the human inflammatory response to external threats and injury. Over his career, Peden has authored 160 research articles and book chapters and is associate editor of The Journal of Allergy and Clinical Immunology and editor-in-chief of Current Allergy and Asthma Reports.

“We are very proud of Dave’s accomplishments and we are very fortunate to have him on the faculty at UNC. His leadership and vision will greatly benefit the UNC Institute for the Environment,” said Dr. Blossom Damania, Vice Dean for Research at the School of Medicine.

Peden has a long history with IE and has held tertiary roles with it since 1992 when he started at UNC. Peden assisted with an IE-led multidisciplinary report commissioned in 2009 by the North Carolina senate on the effects of climate change on the eastern part of the state. He also has served on IE’s faculty advisory committee since 2005. Over the years, he developed relationships with IE’s air quality modeling, water and outreach teams in varying capacities.

Peden knew from an early age that he wanted to be a doctor. Growing up in the Boy Scouts and becoming an Eagle Scout, Peden also harbored a love for the outdoors and nature. At Scout Camp he excelled at first aid and emergency preparedness.

“I was literally in early elementary school when I thought I wanted to be a doctor. That really sounds corny, but that’s actually really true,” he quipped.

In high school, Peden made it a point to work as an orderly in a hospital to see if it was right for him—it was.

He majored in biology as an undergraduate student at West Virginia University (WVU). As an honors student, he began working on a project that would become his life’s work.

“I became interested in a biological process called inflammation,” he said. “I built on that interest and when I was a resident I took care of people with dysfunction of the immune system and people with asthma. Much of asthma is due to allergy, which is also an immune process so that is how I became interested clinically in asthma.”

After completing his master’s degree in pharmacology and toxicology and medical school with training in pediatrics at WVU, Peden took a fellowship at the National Institutes of Health (NIH) to train for his subspecialty in allergy and immunology.

At NIH, Peden developed an interest in translational research and performing human studies. His lab was involved with experiments and studies to try to better understand air way function and inflammation with asthma and allergic diseases.

The research Peden was doing attracted the attention of a unit at UNC-Chapel Hill funded by the U.S. Environmental Protection Agency (EPA). After 5 years at NIH, Peden was recruited to UNC to work in this EPA-funded unit, which later became CEMALB, to conduct human asthma studies in the context of ozone exposure. Ozone is created by a chemical reaction when various pollutants come into contact in the presence of sunlight, such as industrial emissions, motor vehicle exhaust or gasoline vapors.

Over time, Peden’s research extended ozone to include how pollutants in general affect inflammatory responses.

The basis of this research is used by the EPA to determine ozone standards. Peden’s lab was able to show that people with asthma have a specifically increased risk of adverse effects from pollutants, but also that healthy individuals have both a lung function effect and inflammatory response even at low levels of ozone.

This expertise afforded Peden the opportunity to provide expert testimony on behalf of the State of North Carolina in various environmental health cases and provide input for North Carolina’s Clean Smokestacks Act in 2002.

In 2008, Peden was appointed to the North Carolina Environmental Management Commission and served for six years.

“When I look back at the things I’ve done professionally that have had the most impact on health, it has to be the expertise and credibility that helped create policies. I love seeing patients one-by-one and my group is very good at that and we take pride in that, but if you start counting people who are better, it is the policy change that really makes a difference.”

Peden attributes his success as a researcher to being able to collaborate across disciplines. He has been a collaborator on many large grants that span departments and universities around the country. He honed this skill-set as a collaborator and administrator with the North Carolina Translational & Clinical Sciences (NC TraCS) Institute, which he has been involved with in various capacities since its inception. Peden participates on research teams and oversees team sciences services.

“There is a significant, unspoken value to being a team scientist at UNC. We’ve done that very well because that is the nature of the culture here. A person from the School of Medicine can walk to the School of Public Health or two blocks up the road to Chemistry in Arts and Sciences. You are expected to be reasonably collaborative as opposed to other places where you can go one floor down and they can be your arch competitor.”

He plans to bring that same collaborative spirit as the leader of IE and sees his role as an opportunity to synergize data science, environmental science and precision medicine in a transformative way.

“It is incumbent upon us in academe to demonstrate and prove the hypothesis that clean energy and sustainability and improved health is not just economically viable, it is economically necessary. It will be a revenue driver,” Peden said. “At the end of the day, we have to solve problems that are meaningful. Environmental impact on health is an extraordinarily meaningful problem, so for me that drives my enthusiasm for taking on this role with the Institute for the Environment.”

Peden’s daughter, Ariana, recently graduated from UNC-Ashville and will begin law school at Emory University in Atlanta this fall. Peden also is a Judo enthusiast and has been the faculty advisor to the Carolina Judo Club since 1994.