A team of researchers at UNC-Chapel Hill and N.C. State University are studying contaminants in the waters near the Lumber River and its tributaries after heavy rains from Hurricane Matthew caused extreme flooding and impacted a large swath of eastern North Carolina. The team, led by Diego Riveros-Iregui—an assistant professor in UNC’s geography department—won a RAPID grant from the National Science Foundation to quickly mobilize researchers to collect data and begin this unprecedented study. 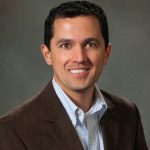 “We are going to learn how connected surface waters are to groundwater during extreme flood events,” said Riveros-Iregui. “Our study essentially starts at the peak of a highly unusual flood and monitors the connectivity between surface water and groundwater as the flood recedes.”

Not only did Hurricane Matthew destroy homes and businesses and disrupt utilities, the massive amounts of rain caused tremendous flooding and the opportunity for surface, ground and drinking water to cross contaminate. To add to the contamination, the site of the study in Robeson County is situated in a region containing some of the highest densities of concentrated animal feeding operations (CAFOs) and animal processing operations in the United States. Contaminant sources from animal waste, human waste from sewer and septic systems in this severe flooding event give researchers the opportunity to document the connectivity of local waters.

“When this type of floods occur, the most pressing need is to collect the water samples during the event and immediately after,” he said.

Riveros-Iregui initially brought up the idea of applying for RAPID funding to Ryan Emanuel, an associate professor at N.C. State. They strategically chose a research team to capitalize on interdisciplinary relationships and piggyback off of projects that are already in place. The study includes faculty, researchers and students from within UNC-Chapel Hill and N.C. State who come from a range of fields of expertise ranging from public health to environmental management to remote sensing, to hydrology. The team will analyze contaminants, nutrients and other compounds found in local waters.

Although the study officially started Dec. 1, the team has benefited from projects already in place at the site prior to the flood. The team also works with the Lumbee Tribe of American Indians who are assisting in identifying collection sites and collecting samples.

Over the next year, the team will tediously collect hundreds of samples to see how the water quality recovers. In particular, they want to know if any potentially harmful chemicals in the surface water made it into deep groundwater, which could have implications for human health. A number of samples will be archived for future analysis.

“We hypothesize the recovery will occur at different rates across each hydrologic compartment. The concentration of pollutants will be reduced quickly in some waters, but it could take a lot longer in others,” said Riveros-Iregui.

This grant is administered by the UNC Institute for the Environment.